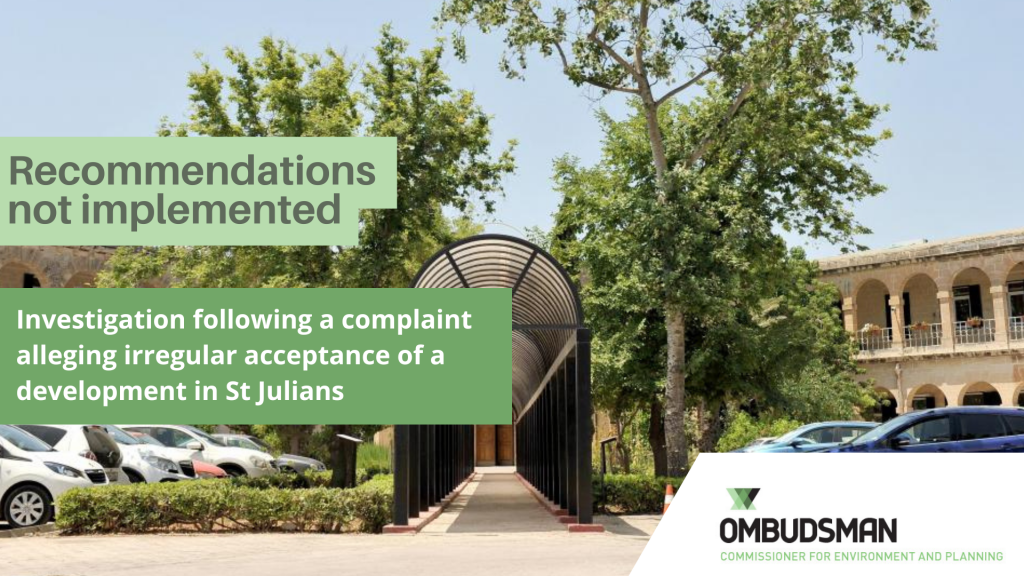 In accordance with Article 22(4) of the Ombudsman Act, the Ombudsman, Mr. Anthony C. Mifsud, and the Commissioner for Environment and Planning, Perit Alan Saliba, have submitted the Final Opinion to the House of Representatives concerning an investigation following a complaint alleging irregular acceptance of a development in St Julians.

The Office of the Ombudsman received a complaint against the acceptance by the Planning Authority (PA) of a Development Notification Order for the erection of an ATM and booth in St Julians.

The Commissioner for Environment and Planning initiated an investigation by asking the PA whether the authority considered these constructions at road level would require any works below road level, mainly because the site is situated on the shore and elevated level with the promenade. Regarding the question about the subsidiary legislation, the PA stated that the Authority did not evaluate the proposal against Subsidiary Legislation 552.08 Class 4(iii) as the proposal did not fall under that development category but under Class 4(ii). In a later clarification, the PA clarified that the development was being considered for both Class 4(ii) and Class 4(iii), which contradicts the previous communication by the PA.

Following the investigation, the Commissioner for Environment and Planning concluded that the allegations against the Planning Authority that it irregularly approved the development in St Julian’s are found to be justified as the approved booth is three times the size allowed in the Development Notification Order.

The Commissioner recommended that The PA invokes Article 80 of the Development Planning Act and revokes the permit in question due to errors on the face of the record and due to the submission of a plan (section) that does not reflect the situation on-site. It was also recommended that the PA take enforcement action against unpermitted constructions below street level and above the existing floor level.