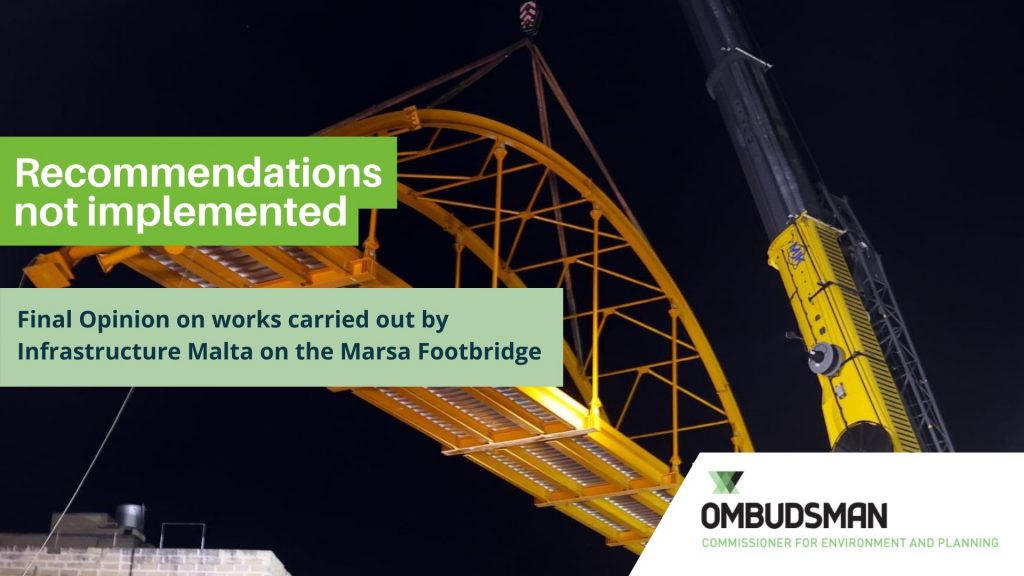 In terms of Article 22(4) of the Ombudsman Act, the Ombudsman, Mr. Anthony C. Mifsud, and the Commissioner for Environment and Planning, Perit Alan Saliba, have sent to the House of Representatives the Final Opinion on works carried out by Infrastructure Malta on the Marsa Footbridge.

However, according to Article 71 of the same Act, “Any person, including a department of government or a body corporate established by law, wishing to carry out any development referred to in article 70, shall apply to the Planning Board for such permission, in such manner, on such form and giving such information as the Planning Board may prescribe.”

Therefore, the Commissioner recommended that every government entity with similar works of a certain size without a permit should request official authorisation to the PA Board, which needs to be decided within days. The Commissioner also recommended that if the PA Board determines that a permit is necessary, it should ensure that the processing of the permit should be fast-tracked since it would be beneficial for public safety.

The Planning Authority informed the Commissioner that it did not agree with his interpretation of the Act and therefore was not implementing his recommendations. Thus, the Commissioner referred the Case to the Prime Minister in August 2021. Since no action has been taken, the Ombudsman and the Commissioner sent the report to the attention of the House of Representatives.