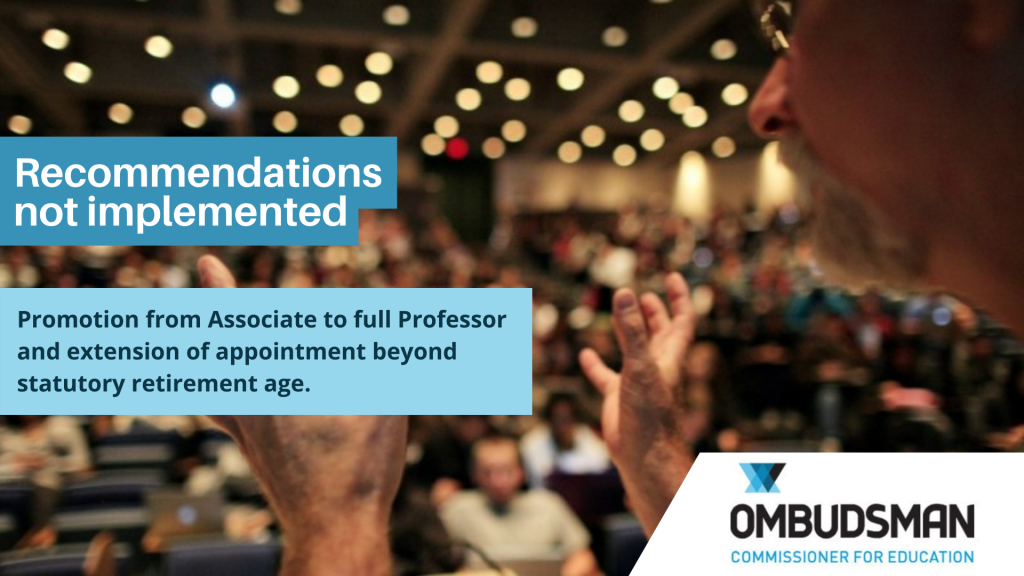 In terms of Article 22(4) of the Ombudsman Act, the Ombudsman Mr Anthony C. Mifsud and the Commissioner for Education, Chief Justice Emeritus Vincent A. De Gaetano, have sent to the House of Representatives the Final Opinion on a complaint lodged by an academic whose appointment as Associate Professor was not extended beyond the statutory retirement age. At the same time, the complainant was also informed that his pending application for promotion to full Professor could not be proceeded with.

Summary of the Case

The complainent, an academic domiciled in Canada, was an Associate Professor in Journalism in the Department of Media and Communications within the Faculty of Media and Knowledge Sciences of the University of Malta.  He applied for promotion to Full Professor, for a sabbatical and also for an extension of his appointment as Associate Professor beyond the statutory retirement age.

As to the first complaint — the non-extension of the appointment and the withdrawal of the sabbatical –the Commissioner found that the complaint was not justified.

With regard to the second complaint, the Commissioner found that this was justified both because of the delay as well as  for the reason that there was no justification at law for not continuing the examination of the complainant’s application for promotion  (see para. 19 of the Report). The Commissioner recommended that the University pay to the complainant on an equitable basis and to remedy for the injustice to which he was subjected the difference in salary between Associate Professor and full Professor for a specified period of time. The Commissioner further recommended that the University or, in default, the Ministry of Education through appropriate legislation, should undertake to ensure that similar applications are, other than in special and extraordinary circumstances to be narrowly and clearly defined, always decided not later than 18 months from the date on which the application for promotion is submitted.

Since the recommendations were not accepted by the University, the Ombudsman and the Commissioner, after seeking the intervention of the Prime Minister, sent the report to the House of Representatives for its attention.

Letter to the Prime Minister – August 2021